Many years ago, during one of our frequent Coffee Times, my dear friend Bob opened my eyes to the wonders of the rhododendron leaf. I was aware of this bit of flora but had never really stopped to appreciate it.  In the summer it is a thick, waxy leafed plant with the large (generally) pink blossoms.

As the seasons change and the temperature falls, the leaves begin to curl up. 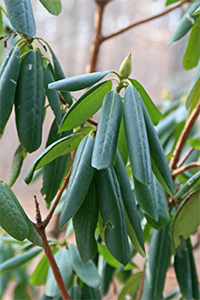 By the time the highs are all lows, the leaves have curled into tiny cigars.  They also fall, or pull in closer to the stem/branches.

“It’s sure been a cold, cold winter.” The Stones

And obviously that reminds me of cigar cookies!!!  Which makes me want to make a grocery store run immediately.

But why do they do that? you’re asking.  I thought you’d never ask!  It’s called thermotropic leaf movement.  Throughout the winter, rhododendron leaves will freeze nearly every night.  They curl to reduce the rate at which the frozen leaves thaw.  Slow thaw rates reduce the risk of tissue damage caused by the freeze-thaw cycle.

Most rhododendrons are found within forrested areas. In warmer seasons, the trees block out quite a bit of radiation.  When those trees lose their leaves, more of the sun’s radiation gets through to the rhododendron and the leaves pull in, or fall, to sort of hide the leaf surface from the sun.  How they do all this is still up for debate (i.e. discovering).